Xander Nichting
in How To

How To - The circle of fifths explained

The circle of fifths explained

A chunk of theory coming up, but an important one if you want to understand key signatures, scales, and basically, what the heck you are doing.
We need to know how this works on a violin, so here goes:

At the beginning of a staff you will see the key signature, amongst other things (like clef and time signature).
You see sharps or flats (or no sharps or flats), showing you much more which note has to go a semitone up or down.
It (almost) shows you what key you are in.
With "almost" I mean that there still remain 2 choices basically: Are we in a major key or a minor key.
Does this make sense or did I loose you already?
No worries, it is easier than you think, trust me!

In the beginners course we start off with grips, being the placements of the fingers.
Every exercise and song starts with the first grip only in the beginning, after that the second grip, (where we lower the 2nd finger).
all this time you are playing in many different keys, you will even notice a different amount of sharps in the key signature of the exercises, however, you do not need to know (yet) in which key you were playing.

When we reach the level that we will combine grip 1 and 2, then it will become more and more important to know something about the key signatures.
This is where I start explaining you what the sharps do, what notes are affected, how we deal with that...
Let's start off with the term key signatures.

The sharps or flats at the beginning of the staff will tell us in which key we are playing.
As mentioned, it will still leave us with 2 options:
A major key
A minor key.
Example: If we see 2 sharps, it could be D-major or b-minor. (There are other scales, but that is for professionals, we will deal with major or minor only).

In the next examples we will only focus on Major scales, this will make the whole thing easier to understand.

Let's start with the scale that has no sharps (or flats), that would be the key of C (major!).
On a piano that would be only the white keys, starting on the note C.
If we would see 1 sharp in the key signature, we would be in the key of G (major).
We want to play the same (major) scale, but if we would start on the note G, we would need 1 black key, the F-sharp (F#).
In the staff you see the sharp on the position for the note F, which means we need to play the note F a semi-tone higher (F#).

The circle of fifths shows us what key signature corresponds to which scale. 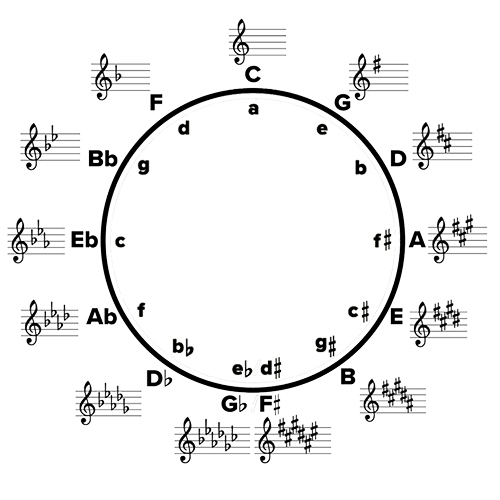 The parallel scales (like C-major / a-minor) have exactly the same notes, they are in fact the same scale! They just start at a different place (at C or at a).

About the author
Xander Nichting
Website
My name is Xander Nichting, violinist (Classical / Modern), composer, arranger and teacher. I am author of the new violin method Creative Violin, from which I am teaching for about 4 years at this time. I am absolutely thrilled to see teachers all over the world starting to teach from this method because of its versatility. With this method and my online community I inspire students of all ages, 6-80+, to follow their dream and getting much joy from playing violin. Get creative, change your life is my motto. Playing violin does just that!
Others also read these